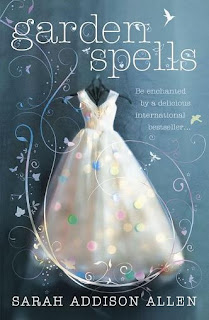 Sydney Waverley is in trouble and the only safe haven she can think of for herself and her young daughter Bay is back home in the little town she grew up in with her sister Claire and their grandmother. She shows up without warning expecting to find her grandmother, but instead finds Claire, her older sister with whom she has had a rather strained relationship. The grandmother has died and now Claire owns the old house with its very special garden, a garden filled with magical flowers and a cantankerous apple tree that likes to toss its apples at people.
Claire, a caterer, uses the magical flowers in her recipes. Sydney and Bay move in and try to fit into the town that Sydney fled when she was just a teen. With a little help from Claire, Sydney discovers that Claire is not the only sister with a special talent.

All throughout this story, I was struck by how much it resembled Alice Hoffman's novel, Practical Magic. Like the Hoffman story, Garden Spells features two very different sisters with special talents, one of whom is running away from an abusive man and, as in the Hoffman story, the man ends up dead, although his death is not shown in Allen's story. The fugitive sister seeks refuge back in their home town and turns to her more settled, calmer sister for help, another similarity. Practical Magic is the better book, I think, with more depth and a more complex and engrossing story than Garden Spells. This is not to say that Garden Spells is a bad book. It just suffers by comparison to Practical Magic. Even though it is a bit of a lightweight, I still enjoyed reading it and found it fun and engaging.

The Edge of Sadness 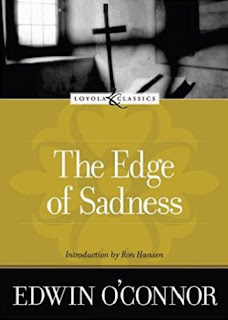 This novel was considered to be a shocker in its time, debunking the myth of the, to quote from Loyola Press, "super-competent and authoritarian but lovable leader, the wise counselor, gregarious extrovert, and heroic celibate (who could nevertheless flirt with the ladies)."
This is the story of Father Hugh Kennedy who grew up in an Irish Catholic parish and was lucky enough to serve in a similar parish in the same town when he was a young priest. While he was thus employed, his father became ill with cancer. As he watched his father waste away in pain and suffering, Father Hugh became more and more distressed. After his father finally died, Father Hugh found refuge from his pain in the bottle.
At first, he was able to control his drinking, but eventually he ended up in rehab. After rehab, he went back to work but soon found himself back in trouble with alcohol. This time he went to the rehab center for almost four years, learning to deal with his depression and his alcoholism.
Eventually he had to leave rehab and get back to work. His bishop kindly gave him charge of a quiet, run-down parish in the poor part of his home town. Father Hugh settles in and basically just hides, letting most of the parish work rest on the shoulders of his young curate.
Bursting upon this quiet scene one day is an old acquaintance from his previous life, Charlie Carmody. Old Charlie is not a nice fellow, in fact, Father Hugh's father described him thus, "As fine a man as ever robbed the helpless." Father Hugh naturally wonders this unpleasant old man wants from him as Charlie insists Father Hugh attend Charlie's upcoming birthday party. Father Hugh agrees to attend, even though he inwardly quails at seeing again all his old friends from before. And so Father Hugh reestablishes contact with Carmody family and in the process finds himself.

This is quiet story of a priest finally coming to terms with his own lack of commitment and it is a strangely engrossing and ultimately compelling read. Father Hugh discovers that his best friend John, who is also a priest, is suffering with a terrible crisis of faith. This forces Father Hugh to look at the reality of his own life, coming to a better understanding of how he has failed in his own commitment to his role as a priest and pastor. 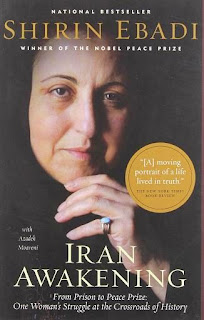 Shirin Ebadi won the Nobel Peace Prize in 2003 for her work for children's and women's rights. She is the first Iranian to receive this award and the first Muslim woman to receive it.
Iran Awakening is about her experiences with the repressive revolutionary religious government that took over Iran after the overthrow of the Shah.
Initially, Ebadi supported the movement to overthrow the Shah because his government was corrupt and repressive and not democratic. She fancied that the new regime would be more democratic than the old. She soon discovered how mistaken she was. As she says, "It took scarcely a month for me to realize that, in fact, I had willingly and enthusiastically participated in my own demise. I was a woman and this revolution's victory demanded my defeat."
Shirin Ebadi before the revolution was a law judge, presiding over a court room. After the revolution, she was only permitted to be a law clerk as a woman was not deemed fit to be a judge. She tries to conform but eventually leaves the court to move into private practice. Her focus becomes abused children and women who have no one to defend them or stand up for their rights in this cruel, male-dominated society that the revolution has created and sustains.
The main problem with the revolution in Iran and in all fundamentalist Islamic societies is their desire to enforce an outdated, centuries-old legal code based on a macho, tribal culture that views women and children as the property of the men in their lives. As Shirin says, "The laws, in short, turned the clock back fourteen hundred years, to the early days of Islam's spread, the days when stoning women for adultery and chopping off the hands of thieves were considered appropriate sentences."
Shirin takes on the cases of abused children and women and of the other victims of the regime. She brings these cases to public notice and comes under the hateful gaze of the government fanatics. She lives knowing that her life is in danger and that she could be killed or locked up at any time, as has happened to so many who have spoken out. Indeed she discovers in government transcript between a government minister and a death squad member that she is reviewing for a legal case that she is on the list of people to be killed: "The next person to be killed is Shirin Ebadi."
After decades of living under a religion-dominated government, Ebadi has come to believe that democracy will only be achieved when religion and government are completely separate. As she says, since the Islamic Republic considers their interpretations of Islam to be divinely inspired and nonnegotiable, how can tolerance and an appreciation of inalienable human rights ever be guaranteed under such a system? The only solution is to separate the two.
Despite the overbearing tactics of the Islamic government in Iran, Ebadi continues to believe that "an interpretation of Islam that is in harmony with equality and democracy is an authentic expression of faith." She also believes that change will come to Iran eventually, even if it takes decades.
At the end of the book she warns the US that using strong arm tactics against Iran will only backfire because it will serve to strengthen the regime's hand against any dissidents and prompt Iranians to stand behind their government out of defensive nationalism.

An interesting look at life inside Iran in the decades following the Islamic Revolution, Ebadi's book is informative, compelling, engrossing and well worth reading. 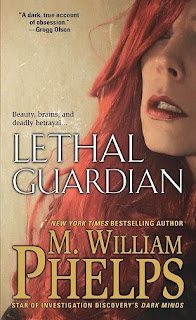 What one wouldn't do to protect an innocent child. Beth Ann Carpenter was willing to end a life to save her little niece, Rebecca, from Rebecca's abusive step-father, Buzz Clinton. Beth Ann vamped her besotted boss, Haiman Clein, not only into finding a hitman but also paying the hitman's fee. All Beth Ann had to do was provide a photo of the intended victim, Buzz Clinton.
This tale of love turned to obsession (the obsession of Beth Ann for her little niece, Rebecca, and the obsession of Haiman Clein for Beth Ann) really starts with the Carpenter family. As the author says, in the Carpenter family, Beth Ann could do no wrong and her sister, Kim, could do no right in their parent's eyes. So when Kim gave birth to a girl with developmental problems, of course her parents stepped in to care for the baby since Kim was a loser who was, according to them, an unfit mother. Kim, not known for her strong character, let them run roughshod over her and she pretty much surrendered her responsibilities to her parents and her sister, Beth Ann.
The picture changed when Kim met Anson "Buzz" Clinton. Buzz provided the backbone that Kim lacked. With his encouragement, Kim moved to bring Rebecca back into her life and home, igniting a custody fight with her parents & Beth Ann who were now not only trumpeting Kim's unfitness but also claiming that Buzz was abusing both Kim and Rebecca. This despite repeated investigations into the abuse allegations that never revealed any trace of abuse.
The Carpenters were further alarmed when they found out that Buzz was planning to move Kim and the kids to Arizona, a long ways from Connecticut and a state where grandparent's rights didn't weigh much with the courts.
Not only is this case interesting because of the desperation of the Carpenters to protect Rebecca from a person they saw as an abuser, but also because of Beth Ann's involvement of Haiman Clein. Haiman Clein was completely enamored of Beth Ann, a young, pretty lawyer who had recently started working at Clein's law firm. Clein was not the upstanding citizen he appeared to be at first glance. An officer of the court he may have been but he lived as though laws were for everyone but himself. Embezzling clients' monies, abusing legal medications and using illegal drugs, involved in wife-swapping and other sexual shenanigans, Haiman Clein was quite a piece of work. It is not surprising that when Beth Ann suggested that Buzz Clinton should be taken out that Haiman Clein was all for it. He even had the perfect guy to go to for it, his drug dealer, Mark Despres.
This is a riveting tale, one that almost makes one believe in fate. So many times in this story, if one person would have stood up and said, "Enough!" then maybe Buzz Clinton wouldn't have been shot to death and left to lay on the highway. The author presents the case clearly and tells the tale of the untimely end of Buzz Clinton in such a way that leaves little doubt that justice was served when Beth Ann Carpenter, Haiman Clein and Mark Despres received their sentences for murder.