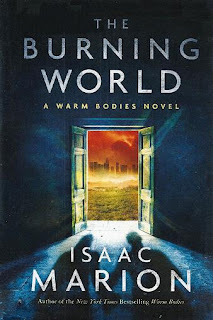 This is the follow up to Warm Bodies. R and Julie are still together and R is living in the human compound, trying to become more human, with mixed results. M aka Marcus has wondered off to the woods to find himself.
Lots of zombies have moved into the human zone, as they make the slow transition from dead to barely alive to living. But someone has figured out that zombies can be trained to do simple tasks and has created zombie factories. And this group has decided it is going to run everything and is moving in on all the human enclaves and setting themselves up as the final authority. Anyone who resists is in danger as is anyone who tries to stop them from rounding up the zombies and the semi-zombies.
R and Julie run afoul of this corporate takeover of their compound and are forced to escape. In the process, they encounter Julie's dead boyfriend's brother and find out he is a pilot.
Pursued by the goons of the corporation, they return to the airport and take off in R's old home, the airplane. But their escape is only temporary and R is starting to remember some very disturbing things about his past and his strange connection to the corporation.

The first book was kind of cute and charming. This book is the opposite. It is grim and depressing and obviously the next in a series. It's an interesting story, but too dark in tone for my taste. 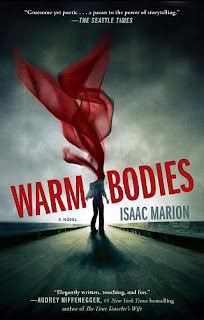 R is a zombie. He "lives" in a plane at the airport. He has friend, M, who is also a zombie. They sometimes hang out together. He also has a zombie wife and two zombie kids. But that doesn't stop him from falling for a living, breathing girl, Julie.
One day, feeling a bit peckish, he heads into the city, looking for a bite to eat. He and his zombie companions are lucky enough to find a group of teenage humans out foraging. This is where he first encounters Julie and, for reasons unknown to himself, he saves her from the others and hides her in his airplane.
Julie, of course, is terrified, being held captive by a zombie. But, as they spend more time together, Julie begins to soften toward R. And R begins to feel more alive.
There is only one thing that may come between their burgeoning love: R ate her boyfriend's brain.

This was a cute idea. And it was just a few pages into the story that I realized I had seen it as a movie. I enjoyed the movie and that kind of spoiled the book for me. Also, the movie ending is more upbeat than the novel.  But  I did enjoy the novel too. 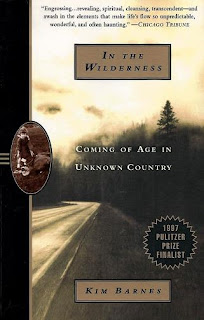 Kim grew up in the logging communities of Idaho. Her parents had fled poverty from the southwestern states and settled in the woodsy towns and company towns of the logging industry. Her father worked as a logger and they were joined by other family members looking for a better life too. Kim's parents came from backgrounds of alcoholism, poverty, abusiveness, and failure.  Her father and mother found direction and solace by joining a Pentacostal church whose teachings helped them overcome the addictions inherent in their very DNA. The father became the demanding authoritarian figure he believed the Bible required him to be. The mother became the submissive, subdued and obedient servant she believed the Bible required her to be.
Raised to believe the inerrant truth of the Bible, Kim followed her parents' lead and tried to be the submissive, subdued and obedient daughter she was told the Bible required her to be. But then she became an adolescent and the family moved from the woods to town.  The pressures of teenage life and the urge to conform to her peers created conflict between Kim and her parents. She began to rebel. She no longer wanted to wear the long dresses, the knee stockings and the braids in her hair deemed proper for a girl her age. She wanted to be like the other kids and wear jeans, and shave her legs and wear makeup and go to parties. She didn't like being an outsider, like most kids, she wanted to be part of the group. Her anger about the restrictions of her parents' fundamentalist religion drove her to more extreme forms of rebellion, ending up with her running away from home. But she was soon back home and her parents gave her a choice: reform school or back to the woodsy community to live with the Pentacostal preacher and his family. She chose the preacher.
Once settled in with the preacher's family, Kim again conformed to behavior expected of her gender. Cook and clean, do the chores, be quiet, be submissive and obedient. But despite her best efforts, the preacher and his family turned against her and claimed she had brought demons into the home and that she was trying to seduce one of the men of the family.
So back home with her parents and little brother, once again Kim toed the line and tried to fit herself into the mold required of her. But, now moving into adulthood, she began to question the unfairness of it all. How she was made to feel sinful simply because she was female, simply because she was pretty. At eighteen, after graduating from high school, she moved out when her father wouldn't let her go on a camping trip with a group of teens from her school.  He gave her an ultimatum: if she left to go on the trip, she couldn't come back home to live. So she left and made her way in the world on her own.

This book describes way of a life that is pretty much anti everything I care about. They were deeply religious. They hunted and fished. They cut down the forest and damned the rivers, polluted the air and poisoned the water and saw nothing wrong with it. Their religion imposed ridiculous standards on people but completely failed to teach reverence for God's creation.
I found it hard to sympathize with her story and of how she went from one extreme to the other, from super-pious, super-religious (she even spoke in tongues and was a faith healer) to out-of-control, raging teen rebellion. I found it shocking how blind she and her family were to the destruction of the wilderness they supposedly loved and how gutless they seemed in their willingness to bow to the silly dictates of their extremist religion.
So even though I didn't have a lot of sympathy for her or her religion-addled parents, I still enjoyed the story and I am glad she was able to free herself in the end. 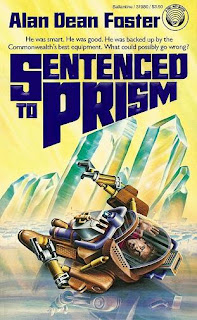 Prism. A planet unlike any other. Life there is based on silicon, not on carbon: plants and animals with bodies of glass and minerals. A world of living gems. And the big corporation that has discovered it is eager to exploit its many wonders. They sent a team to the planet but have lost contact with them. Now they are sending Evan Orgell to the rescue, all very undercover and hush-hush. Because what they are doing is highly illegal and breaking several laws, keeping knowledge of a newly discovered planet hidden.
Evan is a highly confident man and his employers are also highly confident that they have equipped him with the best in survival tools, mainly the MHW, the Mobile Hostile World suit, a suit designed to be a mobile, completely equipped habitat, travel and defense garment. But the suit designers didn't know about the dangers of Prism.
So it isn't long until Evan finds himself, naked and afraid on the hostile surface of an alien planet. It was only a matter of days before the suit failed and he was forced to abandon it. Now he has no one to help him and no real understanding of the native life and its dangers. As he has discovered, the trace minerals that compose the human body are a smorgasbord to the denizens of Prism, as witnessed by the many organisms dining on the remains of the very team Evan was sent to rescue. Not only are all the people dead, but the base's equipment has been destroyed too, including communications, munched to death by invading plants and animals.
Fortunately, Evan is rescued by a kind, compassionate, highly intelligent Prism native, who takes him to his compound and who accompanies Evan on his trek to locate the beacon of what may be the only surviving member of the base team, lost, it seems, in the strange and inimical wilderness of Prism.

This is probably the third or fourth time I have read this story, which says a lot about how much I really, really like it. Every time I read it again, I like it just as much as the first time. The reason why is because of the charming and wonderful Prismites who rescue and aid Evan in his quest. I just love them. They are everything you would hope an intelligent alien people would be. 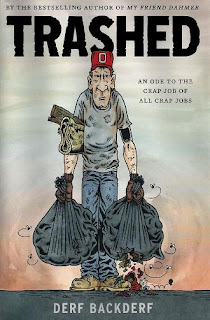 JB has dropped out of college and moved back in with his mom. But she has reminded him that he has to be either in school or working. The town where he lives doesn't have a lot of openings and the only job he can find is as a garbageman. And so begins his education in garbage, small town politics and the quirks of the trash-creating public.

If you have ever wondered what it is like being a garbageman, this book will give a really good glimpse of it. And it has lots of information about how garbage is handled (or not) in this country. It's pretty gross but very informative and amusing. And it is a quick read because it is a graphic novel. 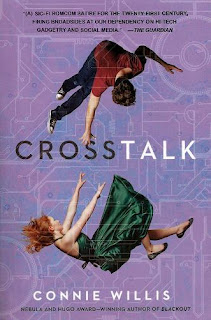 Briddey is a young woman who works for a cell phone company. Their biggest competitor is Apple. So the company, Commspan, is constantly trying to develop ideas that will appeal to consumers and enable the company to get the jump on Apple. Trent, Briddey's fiancé, also works for Commspan and he is working on a secret project that he hopes is going to impress his boss very much. What he hasn't told Briddey is that she is part of his secret project and the project is the reason why he wants the two of them to undergo a surgical procedure that will create an emotional bond between the two of them. They will be able to sense each other's emotional state and, supposedly, this will create greater closeness and trust in their relationship.
But Briddey gets much more than she bargained for, thanks to her Irish roots. Turns out the Irish have a telepathy gene and the surgery just activated hers. Now she is hearing the whole world and it is unbearable. Fortunately, the first person she hears upon wakening in the hospital is C.B., a coworker at Commspan and, it turns out, an old hand at telepathy. Together, they work toward enabling Briddey to cope with the mental onslaught. Eventually Briddey discovers that Trent's motives aren't exactly pure and unselfish towards her and that he is mainly interested in scoring points with the big bosses and advancing his career.

Usually I enjoy novels by Connie Willis. But not this one. It was just too chaotic. The poor main characters hardly ever have a moment to just be. They rush here, they rush there, they call, they text, they climb all over each other. It was a real rat race and just tiring to read. Also, the romantic plot is just the usual stuff: girl falls for boy, who is a jerk, girl finds new boy and realizes first boy is a creep and falls for second boy. Ho-hum.