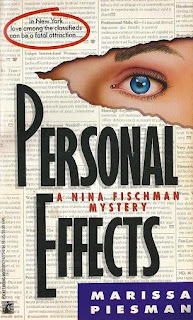 Thirty-something NYC lawyer Nina Fischman is lonely. She choose the professional life, and even though she has been involved with several men, none of the relationships stood the test of time. Now she second guesses herself, comparing herself to her sister, married to a successful man and with young children. Frankly, Nina is disappointed with herself.
Recently, her best friend Susan has moved back to NYC. In the past Susan has been a bit of a gadabout, unsettled in her life, both working and personal. Susan too, is questioning her past choices and has returned to New York because she has decided she wants to be a married woman. To help her find the right man, Susan has placed personal ads in various New York publications and has been on a few dates with men who responded to the ads. But one of those men turns out to be a dangerous person and Susan ends up strangled and dead.
Nina, as Susan's closest confidant, works with the police to figure out who the killer is. Unfortunately, Susan didn't reveal a lot of detail about the men in her life. All Nina knows is that Susan said he was good-looking, physically fit, had good hair, liked hiking and wore contacts. Susan never told anyone the man's name.
So, together with police detective James Williams, Nina will place personal ads similar to those that Susan had placed, hoping to attract the killer. Which means that Nina will find herself going out on dates with several strangers, hoping and dreading that one of them may be a murderer.

This was an interesting if unlikely story. I really can't see the police ever agreeing to such a lamebrained scheme. Or that the killer wouldn't moderate his behavior, at least for quite a while, rather than continuing on as if nothing terrible had happened.
But despite the weak plot, I did enjoy the story. It was fun following Nina on her dating adventures with the various suspects.

Check out the review by Publishers Weekly

On a side note, this is what the characters in the book have to say about donald trump:


Well, I don't understand why the public is so fascinated by him. To me he is just another boring, narcissistic businessman. There's nothing cool about him.

This book is copyright 1991. So even back then New Yorkers were seeing through trump. 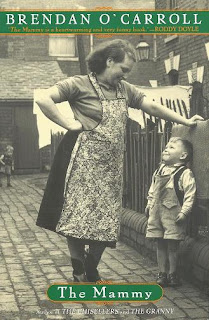 Agnes Browne is a street vendor, recently widowed, with seven kids. Her dead husband was no prize and his absence makes life both harder and easier for Agnes. Harder because of less money coming in and easier because he was abusive.
They married young when Agnes became pregnant. Neither of them had much in the way of education. The husband worked as a laborer. If it weren't for charity and the church, life would be nearly impossible for such a large, young family. The oldest child is 14 and the youngest 3.
Now that her husband is out of the picture, Agnes is determined her children don't end up as ignorant and unskilled as she and the husband were. She is especially determined that the oldest child continue his education and learn a trade. But the boy is equally determined to quit school and get a job to help out his mother.
Somehow, they all work together and create a happy and loving home, just getting by, but sometimes just getting by is good enough.

Agnes Browne's situation is difficult, but this is not a sad story. This is a rollicking and happy look at an Irish family loving each other and working together to help each other. And getting into scrapes and dealing with sorrows and setbacks and discovering new possibilities and new hopes.

Check out the review from Publishers Weekly 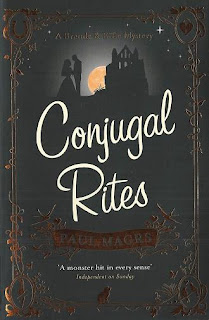 Trouble is once again afoot in the seaside resort town where Brenda and Effie live. Lately townsfolk are glued to a late night radio broadcast, The Night Owls, hosted by their old enemy from the first book in the Brenda and Effie series, Never the Bride, Mr. Danby. The radio program encourages locals to call in and spill the goods on their fellow citizens.  Mr. Danby and his radio show seem to have a hypnotic effect on his listeners, as they stay up all night listening to their neighbors bad mouth each other. When Brenda tunes in to see what is what, she is upset to discover one of the targets of the malicious radio gossip is Brenda herself.
But that is not the only rotten thing in town. Brenda's long lost and not missed ex is in town and he has only one thing on his mind: wooing and marrying Brenda, whether she is willing or not.
This adventure will take Brenda and Effie to hell and back and will change everything in both their lives.

This was a fairly good story. The story, for the most part, shifts from Brenda to Effie, as Brenda disappears from quite a large part of the story. Effie's and Brenda's young man friend Robert steps in as Effie's sidekick and he and Effie work together to bring Brenda back. But Brenda being lacking from much of the story spoiled it for me, as I find her story more interesting than that of the other characters. 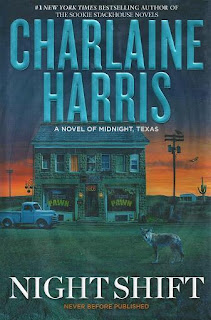 Book 3 of the Midnight, Texas series.

Here, once again, are the characters from the first two books: Fiji, Bobo, Manfred, Chuy, Joe, the Rev, Olivia, Lemuel, Mr. Snuggly and others.
A new disaster has struck the tiny town of Midnight. Lonely people are coming to the crossroads in the heart of Midnight and killing themselves. After three people have done this, the locals realize that something is seriously wrong.
The key to the mystery is in the old books that Lemuel is trying to get translated. It gradually becomes clear that a demon was interred under the crossroads hundred of years ago and that the spell that bound it there is starting to wear off. It has been calling the vulnerable to itself and gaining power from their deaths.
The Midnighters must act before it can rise and seize Fiji, the witch, and create a demonic kingdom on Earth.

This was a fairly good read. To me, the best thing about it was getting to know more about the odd inhabitants of Midnight. I hope this is not the last book in the series, as I would like to read more about that strange crew. 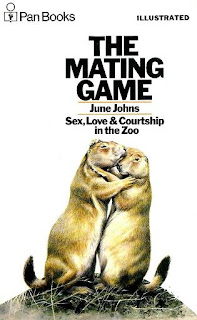 Zoos are one of the places of last resort for the world's endangered animals. So breeding these animals to propagate the species is very much a part of many zoos today.
But breeding the different species is no easy task. So many animals, especially the most endangered, have a very specific set of requirements for successfully bearing and raising their young.
From monkeys and apes, to rhinos and hippos, bears, penguins, reptiles, snakes and even more, June Johns takes a look at the reproductive lives of the animals found in one particular zoo in England.
So, apparently, the love lives of animals of all sorts are fraught with danger and murder. Moms killing their babies, dads killing their offspring, the grown offspring killing their parents...who knew raising babies in a zoo setting was so brutal and bloody?
This book was written in the 1960s. Hopefully zoos have grown more learned in their dealings with their resident animals and are able to provide safer, more nurturing habitats for all the animals under their care.

This was an interesting read. It is not a book meant to amuse the reader, it is very factual in its descriptions but I found it quite engrossing. 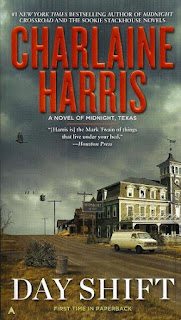 Manfred the psychic is settling into his new home, getting to know the different folks who make up the core of Midnight, Texas.
He travels out of town to see a wealthy client, Rachel Goldthorpe. In a strange coincidence he sees fellow Midnighter, Olivia, dining with a couple at the same hotel where he is staying. The people Olivia is with turn up dead in an apparent murder/suicide. As an acquaintance of Olivia's, Manfred is questioned by the police as to his connection to her and to the two dead people.
Then, during his consultation with Rachel, she suddenly dies. She was an older woman and had recently been very ill. But still it seems a bit suspicious. Manfred comes under suspicion because he is being accused of stealing Rachel's jewels, which her son claims she must have been carrying in her purse at the time of her death, since he can't find them anywhere in her house.
It looks even worse for Manfred when it turns out that Rachel's cause of death was an overdose of her own medication, placed in her personal bottle of drinking water that she had with her during her meeting with Manfred. Never mind that Manfred never had access to her medications and likely didn't even know what medications she was taking. It is all just too fishy for the police and he ends up being suspect number one.

This was an OK read. Take away the fantasy elements, though, and it is just another mystery novel. The story does have a subplot about weretigers (like werewolves but with tigers) that comes together at the end with the murder mystery, but in a rather contrived way. 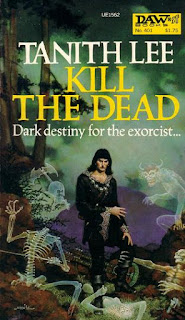 When Parl Dro was a young teen boy, a girl he liked was killed and her ghost began haunting him. It drew strength from Parl Dro and tried to tempt him into joining it in death. This was the beginning of Parl Dro's start as an exorcist, one who puts the dead to permanent rest,
Parl Dro is not alone in this tale. He is joined by a talented musician who plays an extraordinary instrument. Myal Lemyal has not had a prosperous or happy life. As he explains to Parl Dro, he wants to write an epic song and thus make his fortune. He wants to base the song on Parl Dro's battle with the ghost town of Ghyste Mortua, a battle that rumor has it is Parl Dro's ultimate destination.
A third "person" will accompany the two men on their trip to Ghyste Mortua: the ghost of Ciddey Soban. Ciddey may be dead, but her need for revenge against Parl Dro burns. Parl Dro came to Ciddey's house and against her wishes laid to rest the ghost of her dead sister, a ghost that Ciddey had purposely freed from the grave. Upon discovering what Parl Dro had done, Ciddey promptly killed herself, crazed with grief upon losing her sister for the second time. Her ghost has attached itself to Myal Lemyal and is following him and Parl Dro on their fateful journey to face the killer ghosts of Ghyste Mortua.

This was not an interesting story. It was boring. Although I did find the twist at the end to be unexpected and surprising. It kind of redeemed the rest of the story.