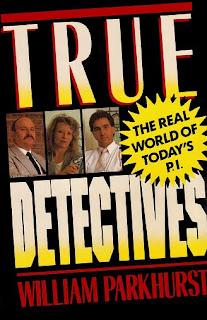 A look at the working lives of several New York area private detectives.
Vincent Parco helps a man find out if his wife is cheating on him with his business partner.
Joe Howard, president of Carney Detective Agency, which he named after his uncle, helps a small museum discover who among the staff has been stealing items from the museum.
Peter Castillo, bounty hunter, has the unenviable job of tracking a bail skip wanted for rape.
And finally, there is Barry Silver, who is helping a young man find his biological mother.

This was a pretty interesting book, written back in the 1980s but a bit dated because of that.

An interesting side note, one of the detectives in the book, Vincent Parco, was recently convicted (June 2019) of try to blackmail a witness in a child sex abuse case.

Fritz Leiber's Fafhrd and the Gray Mouser : The Cloud of Hate and Other Stories 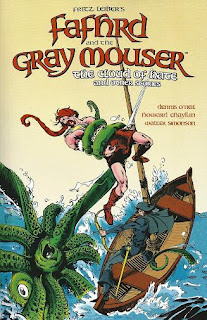 By Fritz Leiber and Denny O'Neil

A comic book collection of Fafhrd and Gray Mouser stories. Some of the stories are adaptations of ones written by Fritz Leiber. Other stories were new additions written by Denny O'Neil.
No. 1 is an adaptation of the story, The Price of Pain Ease where the two adventurers get involved with a man who wants to kill death.
No. 2 is an adaptation of Theives' House where Fafhrd and the Gray Mouser get tangled up with a jeweled skull.
No. 3 is a new story, Betrayal, and finds Fafhrd and the Gray Mouser off to rescue a princess in distress who, it turns out, doesn't want to be rescued.
No. 4 has two stories. One is based on Leiber's story, The Cloud of Hate. The other, The Prophecy, is by Denny O'Neil and is the story of young Fafhrd before he joined up with the Gray Mouser.
No. 5 also has two stores: an adaptation of The Sunken Land where Fafhrd falls in with doomed treasure hunters and a story by O'Neil, The Mouse Alone, which is a story of the Gray Mouser when he was just a young Mouse.

It was interesting to see the Fafhrd and the Gray Mouser in full color. But I really prefer the original stories more than these adapted ones and the new ones by O'Neil. Partially because I have always had a sort of mind's eye image of Lankhmar and Fafhrd and the Gray Mouser which was much grungier than in these drawings. One thing I truly disliked was how every woman is drawn nearly nude. That is just plain stupid and disgusting.

Swords in the Mist 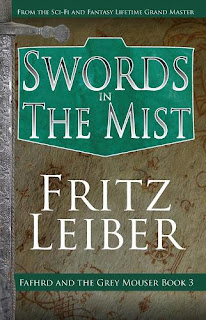 This collection has one of my favorite Fafhrd and Gray Mouser stories, Lean Times in Lankhmar. But the last story in the collection is one of my least favorite, it doesn't make much sense and I really don't care for the change of location from Nehwon to Earth. 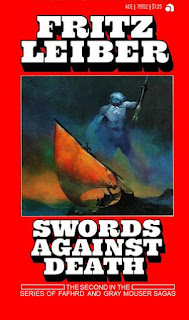 Another collection of the Fafhrd and Gray Mouser stories, published about 1970.

The Circle Curse (1970) introduces the reader to the two wizards that would intersect with the two heroes in later stories, Sheelba of the Eyeless Face and Ningauble of the Seven Eyes. This story is a set up to the rest of the stories.

The Jewels in the Forest (1939) Rumors of an unbreachable treasure house send the two adventurers off to challenge the legend only to discover the treasure is guarded by the house itself.

Thieves' House (1943) Fafhrd and the Gray Mouser are hired by the Thieves' Guild to steal the jeweled skull of a long dead thief.

The Bleak Shore (1940) Fafhrd and the Gray Mouser are put under a spell that sends them on a journey to meet their promised doom.

The Howling Tower (1941) What is the source of mysterious howling? A tale of justice long delayed.

The Sunken Land (1942) Fafhrd finds a ring in the belly of a fish and he ends up on a voyage to a land of myth, held captive by a gang of his fellow countrymen on the search for long lost treasure.

The Seven Black Priests (1953) Once again the two are on the hunt for treasure. Their target this time, a fabulous diamond guarded by seven fanatical priests willing to die protecting it.

Claws From the Night (1951) Someone is using trained birds to steal jewels from the wealthy women of Lankhmar. Fafhrd has a plan to use his own trained eagle to attack the bird thieves and get their booty for himself. But it turns out to be much more complicated than he and the Gray Mouser supposed.

The Price of Pain-Ease (1970) Fafhrd and the Gray Mouser steal a small house and end up in a battle against Death itself.

Bazaar of the Bizarre (1963) The two wizards send the Gray Mouser and Fafhrd to take down a new merchant in Lankhmar who is up to no good. But the Gray Mouser becomes ensnared in the merchant's enchantments and needs rescuing.

A good collection of the Fafhrd and Gray Mouser adventures in Nehwon which ties together the older tales with the story of the two men's first loves. 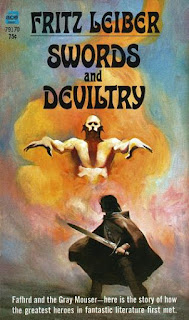 Once upon a time there was an author, Fritz Leiber. He and a friend created two characters, as a kind of counter to the Conan and Tarzar characters that were popular at the time (1930s & 40s). Fafhrd, a tall barbarian swordsman and the Gray Mouser, a smaller man, also adept with a sword and with a little knowledge of magic, a couple of "heroes" out for a bit of adventure and good times.
Leiber eventually tells the backstory of how the two came to be partners in the Swords and Deviltry short story, Ill Met in Lankhmar. The other stories in the book detail the two rogues lives as young men before they came to know each other. In The Snow Women, we learn how Fafhrd barely escaped with his life, fleeing from his vengeful and controlling mother. And in The Unholy Grail, how Mouse (as he was called then) was almost tortured to death at the hands of a vicious nobleman, escaping only with the help of the man's downtrodden daughter.
The two wizards, Ningauble of the Seven Eyes and Sheelba of the Eyeless Face,  that Fafhrd and Gray Mouser later become involved with do not make an appearance in these three stories.

It's a nice introduction to the two characters and to the city of Lankhmar. I read the book back in the 1970s when it first came out and the description of the Gray Mouser's lair stuck with me all these many years. I didn't remember its ultimate fate, but I did remember the description of luxury piled on luxury, silks and velvets, cushions and furs everywhere, hiding rat holes and roaches. 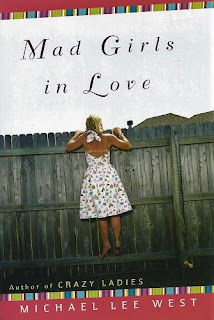 Bitsy is a newlywed with a baby when she figures out that her spouse is cheating on her. They get into an argument and he tries to drown her in the kitchen sink but she saves herself by smashing him in the face with a package of frozen meat. Frightened by the possible consequences (her spouse belongs to a wealthy and powerful family), she leaves him unconscious on the floor and grabs her baby and his car and flees town.
She soon ditches his car and buys a used one. But unknown to her, she has a stowaway. The seller's ward has hidden in the back of the used car and is demanding that Bitsy take her to find her mom (who is probably dead) and threatens to turn Bitsy in if she refuses. Bitsy's in-laws have splashed the story all over the media and so she gives into the brat's blackmail. They end up in a resort town where Bitsy gets a job at a restaurant. But it all comes to pieces when she runs afoul of a coworker's jealous girlfriend. Bitsy decides to leave town, but during the panic of leaving, she drives off with her baby on the roof of the car and is, fortunately for the baby, is quickly stopped by the police. She goes to prison and her spouse is awarded sole custody of baby Jennifer.

And so begins one of the most boring stories of a boring family of boring women and their boring, disfunctional lives, that is supposed to be funny, engaging and witty but is mostly just boring.
The abusive spouse never gets exposed for nearly killing Bitsy, the foul in-laws are never forced to give Bitsy back her child, the child is spoiled rotten and turns into a repulsive bitch.
By the end of the story, I was sick of the whole lot of them. What a bunch of gutless wonders. And I was totally tired of Dorothy's stupid, deluded letters to the various First Ladies of the time.
Also the book is way too long, 528 pages in the hardcover edition. It just goes on and on and on. Ugh!