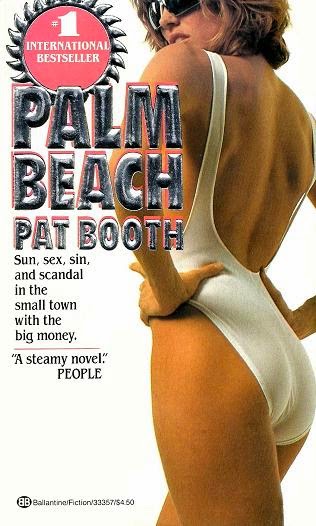 Reviewing this story is like repeating gossip. It is too unsatisfying to leave the juicy bits out. So be forewarned, I will be including spoilers!
Lisa Starr was born on the wrong side of town. She was born where the servants of the right side live. Her mother was a maid and her "father" was a carnival worker. I use quotes because there is some doubt as to who Lisa father really was, the carny or Sen. Stansfield, whose house the mother cleaned.
So although Lisa's beginnings were humble, she was no ordinary girl. Blessed with extreme good lucks and a strong work ethic, she raised herself up from tragedy and loss, to running her own gym, catering to the high class, wealthy ladies of the right side of town: Palm Beach. And that was her entree to the place she wanted to be, to the people she wanted to associate with. Her mother had raised her on dreams of Palm Beach and Lisa's ambition was to be part of that high society.
Lisa became friends with one of the chief lights of Palm Beach society, Jo-Anne Duke. Jo-Anne had achieved her place in that society by marrying one of the wealthiest bachelors in the area. What her husband didn't know about his wife, or rather, found out too late, is that Jo-Anne, before her days as a model, was a prostitute. And also a lesbian. And that is what brought her to Lisa's gym, lust for Lisa's body. Jo-Anne introduced Lisa to her circle and that is how Lisa met Bobby Stansfield, son of Sen. Stansfield and (possibly) Lisa's half-brother. Lisa and Bobby were immediately attracted to each other and fell very much in love.
When Jo-Anne's husband tried to force her to divorce him, she killed him.  With the inconvenient husband out of the way, Jo-Anne sets her sights on Bobby. In order to break up Bobby and Lisa, she lies and tells Bobby Lisa is a lesbian. She also informs him that Lisa's mother used to work for Bobby's parents as a maid. Well, Bobby, who is a US Senator like his dad was, has ambitions of gaining the White House and everything Jo-Anne says resonates deeply with him, and he dumps Lisa, even though she is pregnant with his child, and ends up marrying the evil Jo-Anne.
But Lisa now has connections and a marriage is arranged with a wealthy and horny old man, Vernon Blass. Lisa's baby will be acknowledged as Vernon's and Vernon will make Lisa his sole heir. But on the wedding night, Lisa finds out Vernon wants her to join him in a threesome with a teenage whore and Lisa immediately leaves him and moves to Europe. She also leaves her baby with him since she feels no motherly love for the infant son of the man who dumped her so unkindly. She has decided she is going to learn the publishing business so when Vernon dies she will be ready to take over his specialty publishing house, which is exactly what happens. Only she makes the business successful and becomes a powerhouse in the industry.
Meanwhile, her son is growing up. Scotty is a confused and unhappy young man who can't grasp what he did to earn his mother's indifference. One day, he discovers the enmity Lisa has for the evil Jo-Anne. Desperate to please his mother and win her love, he hatches a plan. He will seduce the evil Jo-Anne and her innocent and lovely young daughter, Christie. Then he will expose his affair with Jo-Anne to poor Christie and ruin both their lives at once, which he proceeds to do. What he doesn't know, in the process of seducing Christie, is that she is his half-sister. The two kids find that out afterward. Christie forgives Scotty for his cruelty and then Scotty tells her what he has found out about his mother and grandmother and that he is a Stansfield not a Blass. Amazingly, Christie is not at all fazed by the fact that she had sex with her brother, explaining to him, "I don't even regret it. I remember it, and it was the best moment of my life so far. I loved making love to you because I loved you, Scott. And I still love you now."
Meanwhile, Jo-Anne is giving into her lesbian yearnings and picked up a young black prostitute but runs afoul of the prostitute's pimp and is murdered, thus clearing the way for Lisa and Bobby to reconcile and marry. And it is never revealed if  Bobby and Lisa are actually half-siblings. The end.

I enjoyed this story despite its rather contrived plot. It's like reading a soap opera, silly and unlikely but still entertaining. It does have several rather graphic sex scenes, if you like that sort of thing. I don't, I generally skip over those parts.
Of course, nowadays, the question of paternity is easily solved through a DNA test but that wasn't widely used or accepted at the time this novel was written in the early 1980s.
According to an article I read,  http://www.people.com/people/archive/article/0,,20092352,00.html this book is based on some real life persons. I recommend reading the article if you are curious about its author and the novel's background.
Interestingly, the author made a prediction about politics that turned out to be true. Bobby's mother is advising her son about politics, saying, " I think you should stick with the zealots, Bobby. They may sound a bit fanatical today, but the way things are going, yesterday's conservatives seem like closet socialists now."  The author was spot on about that. 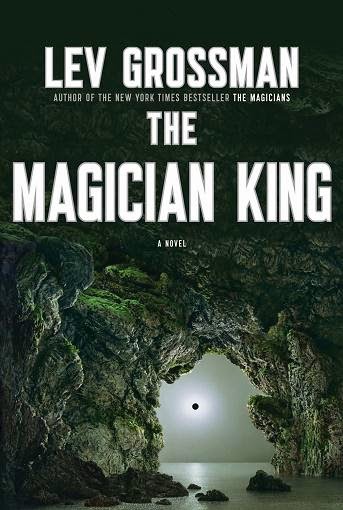 Quentin is reigning, along with three others, as a co-regent of Fillory. Life is easy. It is pretty much everything Quentin had hoped for upon discovering that Fillory was a real place. But still, even having everything can become boring. So when an opportunity to go on a trip to investigate why a certain island is no longer paying their taxes, Quentin is pleased to go. A ship is prepared and the trip is undertaken with the addition of co-regent Julia and off they sail.
Upon arrival at the island, things are soon sorted out, the back taxes paid and all is good. On the verge of heading back to the mainland, Quentin is handed a quest. He is supposed to find seven keys. So he and Julia go forth to find the keys and ending up, to their dismay, back on dull old planet Earth. Julia, especially, needs to be back in Fillory. But Quentin is discovering that Earth is not the boring place he used to think it. Still, despite his homeland's many charms and mysteries, Quentin also wants to return to Fillory and take up his throne again. With the help on an enigmatic dragon in Venice, they succeed. They return to find Fillory in turmoil, all because of those seven keys.

This book was not quite as interesting as the first, but I did like it. I liked that the action switched from Fillory to Earth and back, with Quentin finally beginning to appreciate his home planet a little better. It fills in a lot of the back story of Julia and then takes her to a situation that completely surprised me. It also killed off one of the characters that I had begun to like quite a bit, which was just annoying. Wish the author hadn't done that.
Anyway, it was a pretty good read and I am looking forward the last book in the triology, The Magician's Land. 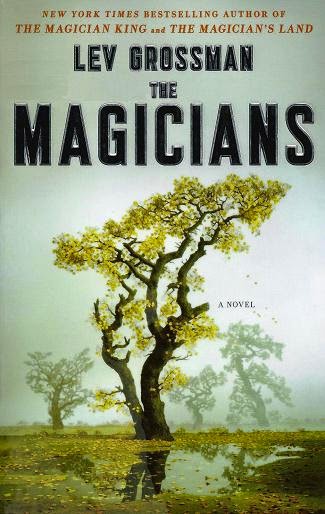 Quentin Coldwater is very bright but unhappy teen. He has his whole life ahead of him but makes him happy. He has a crush on a girl, Julia, who has placed him solidly in the "friend zone."  He is on the verge on entering college when he gets the opportunity to apply to a secret school, Brakebills, that teaches magic. He passes the entrance exam, with some difficulty, and thinks he sees Julia there too. But if he did, she apparently didn't pass the exam.
Anyways, life at Brakebills seems to be everything his heart desired. As he becomes more and more accomplished at magic and makes some solid connections with his fellow students, he feels sure he is on the right track. But then he graduates.
Along with some of his fellow graduates, Quentin ends up in New York City, living off a Brakebills trust fund set up for all their graduates. This trust fund is quite large, enabling the graduates to live the high life. So what do they do with all their new found skills? Spend their days in drunken debauchery. Instead of doing something worthwhile, they just fritter their time away, drinking, partying and wasting their lives.
Then one day a fellow graduate shows up at their apartment. This man, Penny, has found a magic button that can take them to Fillory.
Fillory is the subject of a series of kids books, a magical land with talking animals and other fantasy stuff. Kind of a cross between Harry Potter and Narnia. Quentin has always been fascinated by the Fillory books and often turned to them when he was feeling miserable. His secret dream is to be in the imaginery land of Fillory. And now Penny has appeared with what must be the solution to Quentin's misery -- a way to actually enter Fillory! Now finally, Quentin can find the happiness and contentedness that has always eluded him. Or not.

This series is not for children even though it is based on fantasy series for children. Quentin and his fellow students are a boozing, fornicating, cursing bunch of young adults who are what Harry Potter and the rest might be after Hogwarts. I enjoyed the magical shenanigans of Brakebills and I did enjoy the story a lot up to the point where Fillory enters the picture. Before the Fillory part of the story, I thought it was an interesting look at the life of those with magical abilities in the real world. But with Fillory, it becomes just another fantasy story about a magical land with talking animals, and magic spells, and monsters and all the typical fantasy junk. It became a lot less interesting to me then. Why are these people so concerned about what is happening in Fillory? Just because they read a bunch of stories about it when they were kids? Why are Fillory's problems more important than what is happening at home? Why are they not back on Earth trying to help here and all worked up about Fillory? Earth certainly needs as much and probably more help than stupid Fillory. Here they have all these awesome magical powers and what do they do with them? Get wasted then run off to fantasy-land Fillory.
It's a good story, well-told, very interesting. But the Fillory part of the story didn't speak to me. Maybe that's because I didn't grow up reading Harry Potter books or Narnia books. So I will still say it is a good read.