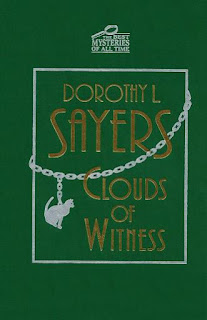 Lord Peter Wimsey has to save his brother the Duke from the hangman. Gerald is accused of killing his sister's betrothed, Denis Cathcart. Wimsey is an amateur but gifted detective and is quite capable of unraveling the puzzle of this murder. But it would certainly be a lot easier if his brother and sister would stop lying about their actions the night of the murder.
Both Gerald and Mary were doing things they probably should not be doing. But, because of the way they were raised, they both lie to protect their loved ones. As it turns out, Mary has become disenchanted with Denis and was planning to elope with another man the night the murder occurs. When she and Gerald stumble across the dead man's body, Mary assumes her lover has killed Denis and Mary starts immediately telling lies to protect him.
As for Gerald, he was in the bed of another man's wife, which he refuses to reveal to the investigators, claiming he was merely out for a walk for several hours after midnight in the pouring rain. Of course he is disbelieved. But he refuses to tell anyone the truth to protect his wife and to protect his girl friend.
So it is up to Wimsey to discover the truth about his sister's actions and his brother's actions and to discover the truth about Cathcart and his apparent murder.

This was an OK read. I thought Mary and Gerald were both a couple of dopes who caused a lot of problems due to their constant lies, especially those of Mary.
Also, at the end of the book Wimsey gets roaring drunk, which, to me, seems totally out of character. Very disappointing behavior.

All the Light We Cannot See 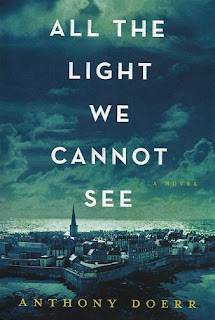 Set in France in World War II, the story centers around a young blind French girl, a young German radio engineer and a priceless diamond gem called the Sea of Flame.
The girl, Marie-Laure, is staying with her father and his brother. Her father has been entrusted with the Sea of Flame by the museum he worked for. He was given the diamond to hide it from the coming Nazi occupation. It is inside a clever tiny puzzle box shaped like a house. At one point, the father is summoned back to Paris but is arrested by the Germans and put in a work camp.
Marie-Laure and her uncle become involved in the resistance as the uncle has a radio hidden in the attic of his house and they use this radio to send vital information to the Allies. But then the uncle is arrested and locked up.
Meanwhile, in Germany, the young boy who has a genius for building and repairing radios, Werner, is an orphan living in a group home with his younger sister. The town they live in is a mining town and Werner's future seems destined to be a miner like his father, a destiny he is anxious to escape. When he is given the chance to attend a military school, he welcomes it, even though his sister is violently opposed.
Life is hard at the school, but Werner prefers it to the thought of returning back to the mines. He eventually is sent to fight in the war, as Germany begins to falter in its attempt to conquer Europe. This is how he ends up in the same town where Marie-Laure is living.
Also in this town is a German officer. He knows about the Sea of Flame and its legend. The legend is that any one who owns the diamond will lose everyone they love but will live forever. He has been tracking the diamond across France and desperate to find it because he is dying of cancer.
The tide turns against the Germans and the Allies start bombing the town where Marie-Laure is living all alone in her uncle's house. He is in prison and there is no other adult to tell her about the leaflets the Allies dropped warning the residents to flee before the bombing starts. She survives the first round of bombs but before she can escape, the German officer comes looking for the diamond, which he has traced to her father.
Marie-Laure hides in the attic where the radio is. The entrance to the attic is hidden but she knows that the German will eventually figure it out. Meanwhile, she is slowly dying from thirst. As a last gasp, she sends out a cry for help over the radio. Her message is received by Werner.
Werner and another soldier were in a cellar with their radio equipment when the bombing started. The building above them collapsed and they were trapped in the cellar. The radio was damaged, but Werner managed to get it working again in time to hear Marie-Laure's message. They also manage to finally dig their way out of the rubble and Werner sets off to help the girl whose voice he heard over the airwaves.

This was an OK read. Long, but most of the chapters are short.

Review by The Guardian. 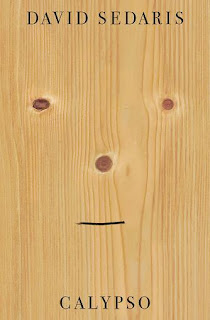 A collection of stories about David's life in England and at the Sea Section, his beach house in North Carolina. He lives with his partner, Hugh Hamrick, when at home in England. But when they go to the Sea Section, all the family is invited to be there too.
Sedaris comes from a large family, with four sisters and one brother. At the time of this book, his mother and a sister are both deceased. The mother died when David was in his twenties but his sister died recently, from suicide. His father is living and in his nineties.
David talks about all his family members, including Hugh's family, Hugh's mom and sister and compares them to the Sedaris family, to neither's advantage. I think he finds Hugh's family a little irritating and that they find him and his family a little wild, maybe.

After reading this book, I would think most people would be reassured that their own relatives are not as weird as they thought. The Sedaris family is weird but in a way that is familiar to anyone who has family. His sister who killed herself was mentally ill. My aunt was mentally ill. His father is a man of wealth who lives in squalor because he refuses to spend money to hire someone to help him at home. My other aunt also lived in squalor, with stuff piled everywhere. Like David's sister, we have suicide in our family too. David's mom was an alcoholic. My cousin was addicted to drugs and had to go to rehab.
Just normal, bent American families.

A review by Sarah Crown in The Guardian. 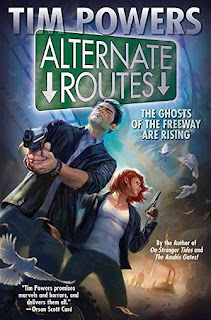 Sebastian Vickery used to be a Secret Service agent until one day when he overheard something he wasn't supposed to hear. Now he is hiding out, working for a taco truck / taxi service company in Los Angeles.
Things are weirder than normal in LA and weirdest of all on the freeways. The almost constant traffic on the freeways generates some kind of spectral energy field that the Federal government is tapping into to gather intelligence. This field enables them to communicate via radio with the dead and milk them for data and to track those still living and  connected to the deceased.
One of those deceased is Vickery's wife, who committed suicide on the freeway, using her husband's gun. Now this secret government agency, the TUA (Transportation Utility Agency) is using her to track down Vickery. They coerced the dead wife into revealing Vickery's location and the TUA sent two agents to kill him. But another TUA agent, Ingrid Castine, arrives just before the two killers to warn Vickery. She didn't get there soon enough and she and Vickery get in a shootout with the two agents. After killing one of the agents and knocking the other one out, both Vickery and Castine are fleeing for their lives.
Meanwhile, Los Angeles is on the verge of a major catastrophe due to the TUA and its demented chief, Emilio Terracotta, and their contacts with the deceased people. Terracotta has been possessed by a dangerous entity from the other side that wants to unite the two realities, with possibly apocalyptic results.

This was a fairly good read. For me, it was a little too much of an action story, which made it less appealing to me. Also, I found the tone of the novel a bit depressing, especially its depiction of the "afterlife." It isn't clear if the ghosts or "deleted persons" as the TUA refers to them, are the souls of the dead or just a bit flotsam cast off by the deceased. Their lot in death is certainly heartrendingly sad. 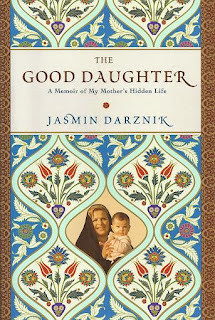 The story of Jasmin's Iranian grandmother and mother. Both women suffered under the unfair rule of selfish and uncaring men and a patriarchal, overly religious society.
The grandmother, Kobra, lived with her husband and his mother. The husband was a gambler and the family's fortune ebbed and flowed with his wins and losses. Kobra had three kids, two sons, one of which died as a toddler and a daughter, Lili.
Lili's father wanted his daughter to be educated so she attended school. When she was about thirteen, she attracted the unwanted attention of a man. The man proceeded to ask to marry Lili, even though she was just a kid. In Iran, a girl was considered old enough for marriage once she had her first menses. So Lili ended up married to Kazem, a grown man.
Kazem turned out to be a brute and he beat Lili. After she gave birth to her first child, a daughter named Sara, Lili decided she could no longer tolerate being married to Kazem.
Unfortunately, in Iran at that time, a divorced woman was considered to be little more than a prostitute. Also, any children born to a married couple belonged to the father and not to the mother. Lili was forced to give up baby Sara.
But giving up Sara gave Lili the opportunity to leave Iran and travel to Germany to further her education. She attained a degree in midwifery. She also eventually married an European man and they moved to Iran.
Lili tried to maintain a relationship with her daughter, Sara, but Sara's father and his family poisoned her mind against her mother. Lili then gave birth to another daughter, Jasmin.
The political situation in Iran was becoming unstable. This was shortly before the time of the Iran hostage crisis in 1979. Lili and her husband left Iran and moved to California. Jasmin was only about three years old at the time.
Growing up in America, Jasmin didn't know about her mother's past. She didn't know Lili had been divorced, she didn't know she had a half-sister named Sara. She accidentally came across an old photo showing her mother and Kazem on the day they were married and naturally wanted to know what the deal was. But Lili refused to talk about it, telling her it wasn't any of Jasmin's business. Lili must have had second thoughts about it and she sent her daughter ten audio tapes, describing her life in Iran and her first, failed marriage and the child she left behind.

This was an OK read. When ever I read one of these Middle Eastern memoirs, it always seems to me that the women are just as much to blame for the oppression they suffer under as the men and the laws that oppress them. The women go along with it, they accept the abuse as their lot in life and they actively fight against the changes that could make their lives better, like education, like ending female circumcision, like ending child marriage. So many prefer to stay with the old ways, the old religion.

Kirkus Reviews has a review of the book.