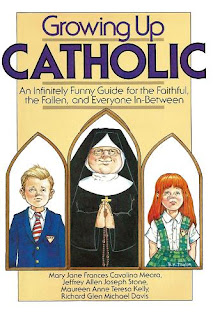 A mildly amusing look at the Catholic Church. Not at all harsh or critical, it is rather nostalgic look back in time for people who were raised Catholic. Has lots of Catholic trivia, with various lists and lots of illustrations.

I was hoping for something a little more sharply funny but this is not that book. I found it rather boring and  didn't finish reading it for most of the summer. Finally forced myself to finish it. It wasn't a bad book, but it wasn't very funny and it just didn't capture my interest.
Catholics will probably not be offended by anything this book has to say about their church.
For another review, see: http://www.nytimes.com/1986/02/13/books/growing-up-catholic-the-making-of-a-spoof.html. 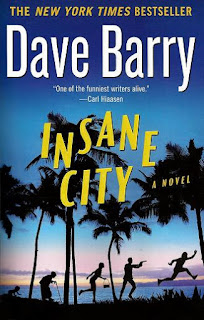 Seth and Tina are getting married in Miami. They are traveling separately from up north to Florida. Tina is traveling with her sister, Meghan. Seth is traveling with his three friends from college, Marty, Kevin and Big Steve.
Tina is beautiful, successful, a perfectionist and the daughter of a man worth billions. Seth still doesn't understand what she sees in him. Tina's parents, Mike and Marcia, don't understand it either and are not thrilled she has picked Seth.
Things start to go wrong from the get go. Seth arrives at the Miami airport to discover Tina in a confrontation with security who want to search her luggage because the drug dog alerted on it. Due to her father's connections, she wiggles out of the search and her sister's weed is not found. Tina and the sister head off to the hotel and Seth and his friends get in a separate cab and end up at the wrong hotel. They go to a bar and Seth passes out under the table. His friends think he has left and they go in pursuit of him. Seth wakes up and finds his friends gone and goes after them, aided by two strangers from the bar, Cyndi and Duane. Duane has a large albino snake draped around his shoulders. Cyndi and Duane agree to take Seth to his hotel but when they get there, a large woman is in Seth's suite. LaDawne is a stripper who was hired by Marty. She won't leave until she is paid and her menacing boyfriend Wesley shows up and he keeps raising the fee the longer LaDawne stays in Seth's suite. Seth leaves the suite in search of an ATM to get some cash to pay LaDawne. He finds Meghan outside smoking her weed and takes a couple puffs. It's strong stuff and combined with all the alcohol he drunk that night, it is too much. He forgets what he was supposed to be doing and falls asleep on the beach.
Seth wakes up on the beach just in time to rescue a Haitian woman and her baby and child. She had hired men to bring her to Florida from Haiti and they abandoned her and her kids in a rickety boat in the ocean. The boat filled up with water and the three were left clinging to it until it washed up near the beach where Seth was sleeping. The woman, Laurette, is leery of the authorities, fearing she will be deported back to Haiti, so she refuses to go to a hospital. A hotel worker helps Seth bring Laurette and her kids up to his suite and agrees to go search for Laurette's sister. LaDawne takes care of the refugees and sends Seth back out for baby formula and diapers. She gives him the keys to Wesley's car.
Using Wesley's car, Seth and Cyndi rescue his three hapless friends, who got rolled by some shady ladies, pick up Seth's parents, Rose and Sid, at the airport, and stop and buy the baby stuff. Cyndi's friend with the snake, Duane, has found Seth's bag that he left at the bar. In the bag is the wedding ring designed by Tina and made from tiny snippets of gold from her family's heirloom jewelry. It's a one of a kind ring and it is vital that Seth get it back. But Duane leaves the bag at a private zoo.
Seth arrives back at the hotel with his whole motley crew in tow just in time to meet friends of Tina's father, Wendell and Greta Corliss. Tina's father, Mike, belongs to an exclusive club, the Group of Eleven. But an even more exclusive club exists, the Group of Six. Mike desperately wants to belong to the Group of Six, of which Wendell is a member. Accordingly, Mike is sucking up to Wendell big time.
At the rehearsal dinner, Seth's mother unintentionally puts a box of pot brownies on the dessert tray. The waiter, thinking they are part of the dinner, serves them to everyone. Mike doesn't partake because he doesn't like chocolate. Seth and Cyndi leave before dessert to go get the Seth bag back. Wendell has three brownies and ends up buying two restaurants, a pizza joint and a Chinese food place because he has the munchies and the two places don't deliver after hours.
Seth is headed to the zoo with Cyndi to pick up his lost bag and, hopefully, the irreplaceable wedding ring.
Trevor, an orangutan, discovers Seth's bag and manages to drag to his cage.  He tears the bag to pieces and finds the red ring box. He finds Tina's scent on the box intriguing and hangs onto it.
Seth arrives at the zoo and finds the remains of his suitcase next to the cage. He spies the ring box but, in the darkness, fails to realize it is in the clutches of a now-sleeping Trevor. Seth goes into the cage to get the box only to be chased by Trevor. In his hurry to get away, Seth doesn't realize he didn't get the cage door shut securely. Trevor follows them to the parking lot, where they are confronted by the security guard who shoots at them and Seth and Cyndi flee in the car. But Trevor has climbed in the back seat.
Meanwhile, back at the hotel, Tina is becoming increasing exasperated at Seth, who seems to be more concerned about the Haitians than about their wedding. She turns to her father for help. But his help is just making things worse and the complications pile up.

This book is like watching a Warner Bros cartoon and suddenly an image of babies starving in Africa with flies walking on their faces appears on the screen.

When You Look Like Your Passport Photo, It's Time To Go Home 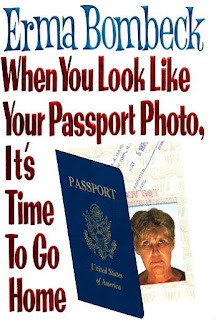 Erma and her husband love to travel and there are few places in the world they didn't visit. So she has a lot to say about the joys and tribulations of vacations. Of course, since this is Erma Bombeck, she keeps her reminiscences on the lighter side, poking fun of not only herself, but also her husband, who is a man who does not believe in traveling light.
Together they went to all the places, the Far East, Africa, Europe, Britain, South America, Alaska, Australia, Russia and floating down the Colorado River in the Grand Canyon of their home state, Arizona, and on and on. About the only place they didn't visit was Antarctica. And they probably visited there after this book was written.
Although she has plenty of opportunities to get maudlin, she mostly avoids doing so and sticks to keeping it light and amusing. Probably a good read for anyone preparing to take a trip to another country!

For another review, see https://www.kirkusreviews.com/book-reviews/erma-bombeck/when-you-look-like-your-passport-photo-its-time-to/. 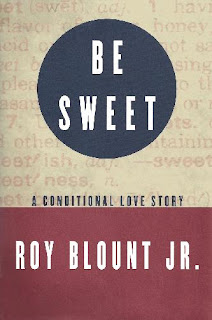 Roy writes about his relationship with his mother, mostly, but also with his father. In the process, he covers parts of his writing career, but not in great depth.
His mother was orphaned and was raised by relatives who really didn't want her, one of which was quite abusive. As a result, she was self-doubting and needy, always questioning her children's love for her. This left Roy, as an adult, trying to understand his mother, trying to understand the difficulties she had to deal with as a child. Perhaps getting a handle on her suffering would explain some of the capricious and pathetic things she did and said when he was growing up.

Blount was a sports writer before he became known as a humorist and it shows up clearly in the book. Not being a sports fan myself, reading page after page about sports people was not enjoyable. There is also a chapter where he goes on and on about juniors, sons who are named after their fathers. Heaps and heaps of juniors until I was quite tired of the junior stories.
I also felt it took him a long time to get anywhere with his story. He meanders and wanders and dallies here and goes back there and does anything but get to the point. And, after all, there really is no point. His mother had problems. Whose doesn't?