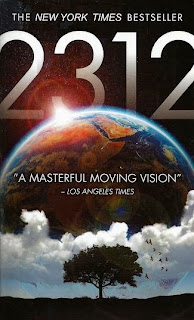 Swan lives on Mercury. Wahram lives on Titan, one of the moons of Saturn. They are "spacers," people born and raised off of Earth. Out there in the solar system life is pretty good. Advanced technology enables humans to live almost anywhere they desire. And with the advanced technology comes advances in medical care too. Both Swan and Wahram are in their 100s but have the vitality and well-being of people in their thirties.
Swan's grandmother Alex is the "Lion" of Mercury. She is the de facto leader of the people of Mercury. She is quite old but in good health yet dies suddenly. Swan is devastated by her death.  She is even more upset when she finds out that Alex had secrets she kept from Swan, secrets that involve the whole solar system. Wahram, one of Alex's confidants, arrives on Mercury just in time to be nearly killed in an attack on Mercury's largest city, Terminator. The city is destroyed and Swan and Wahram barely survive and spend many long weeks waiting for rescue in an underground passage.
But they are rescued and together they carry out Alex's secret mission and try to discover why Mercury's main city was targeted for destruction.

This was an interesting story and also a boring story. Over 600 pages long, it just goes on and on. What is interesting about it is the author's depiction of humanity free to wander the solar system, settling in the most unlikely places, like Mercury, the hottest planet in the system. The main city of Mercury, Terminator, moves on a track that keeps in constantly on the dark side of the planet and out of the burning sunlight. The attack that destroys Terminator is not directed at the city but at its track. Unable to maintain its trek in the shade, Terminator is caught in the light and burns up. Fortunately the population has plenty of time to evacuate.
Not only are people living on most of the planets of the solar system, they have also colonized the asteroids, hollowing them out and building small ecosystems that also serve as refuges for the Earth's endangered and even extinct (on Earth) species.
Robinson's vision of the future is quite appealing and that is what captured my interest. I didn't really care for the main character, Swan, who seems to be a bit unstable. I also didn't really understand the whole attack on Mercury plot of the story. I understand who but didn't get why. That part either didn't register with me or maybe it isn't fully explained. Anyway, my main problem with the book was its length: it's too damn long! That would be OK if it was an exciting, gripping story. But it's not. Interesting but not very exciting or engaging. 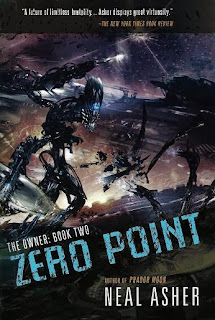 Book Two of The Owner, opens with a new dictator, Serene Galahad, seizing power on Earth and eliminating all threats and potential threats with bloodthirsty efficiency. She wants to save the Earth from humanity and has released a plague called Scour which wipes out half the people. She then threw the blame for the plague on Saul, the man who has taken over the space station Argus. She follows that up with launching an attack on the Argus, sending a space plane after the space station, which is now fleeing towards Mars. It will take the plane months to catch up with the Argus, giving the space station some time to develop new weapons and defenses.
But Alan Saul is laying on a hospital bed, half his brain destroyed by an assassin's bullet. Nevertheless, he was able to transfer his consciousness to the space station's computer system with some limited success. Although he is still running everything on the station, he is no longer capable of communicating rationally.

I liked this story, but not as much as I did the first book in the series. The main character from the first book, Saul, spends much of this book out of the story. The lead is taken over by his companion, Hannah, who tries to fill in for Saul while he lies unconscious. He does wake up later on, but still seems to be less of a leading character than before, which is too bad, because I thought he was very interesting in the first book. The book devotes more time to the villain Serene Galahad than it does that of the hero, Saul. We get to watch her have her father gutted and tortured and have a group of hunters condemned to die via Vlad Tepes' impalement method. I could have done without all that needless gore.
There is a third book in the series, Jupiter War, but I don't think I will be reading it. I liked the ending of this book and am not really that interested in continuing the story.